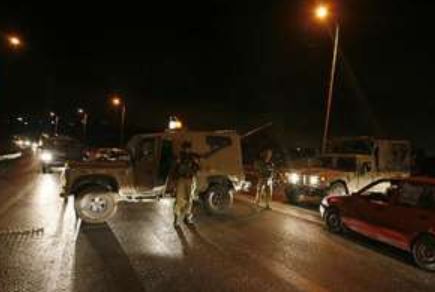 Israeli medical sources have reported that four settlers have been injured, one seriously, late on Monday, in a shooting attack carried out at the Shvut Rachel Junction, south of Nablus, in the northern part of the occupied West Bank. The sources said two of the wounded, one who suffered a serious injury and another in a moderate condition, were moved to the Shaare Zedek Medical Center.

The two other wounded persons, who suffered moderate injuries, were moved to the Hadassah Ein Karem Medical Center, in Jerusalem.

Israeli Ynet News said the four wounded Israelis are in their twenties, and that they were shot in their upper and lower bodies.

Israeli daily Haaretz said the seriously wounded man, 27 years of age, is currently in the Intensive Care Unit, after doctors performed a surgery overnight; he suffered a gunshot injury to his torso.

Following the shooting, Israeli soldiers installed roadblocks, before hundreds of soldiers and including undercover units, initiated a large search campaign in the area.

The Ynet said the attack was carried out by Palestinian fighters, who “either conducted a drive-by shooting, or ambushed the setters, before fleeing the scene with the help on an escape car.”

On Monday morning, a female Israeli soldier was injured after being stabbed in the neck, at the main crossing, near the Rachel Tomb, north of Bethlehem.

The army said it arrested a young Palestinian woman, identified as Maisoon Mousa from Bethlehem, and “located two knives” she reportedly carried in her bag.

According to the army, Mousa admitted to carrying out the attack, and that she went to the crossing “intending to kill a soldier.” It also said initial investigations indicate she acted on her own.