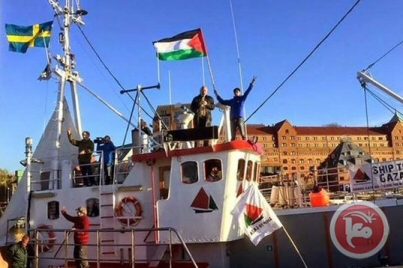 Tunisian ex-president Moncef Marzouki said, Tuesday, that a Moroccan flotilla will be heading to the Gaza Strip within a few day, according to Ma’an.Marzouki reached Charl Degol airport in Paris, Tuesday morning, after he was arrested by Israeli forces on Sunday night. Marzouki was forced to Paris on Tuesday.

Marzouki, according to news reports, described what the Israeli navy did to the flotilla as “piracy which won’t stop us from supporting the Gaza Strip.’

On Monday, Israel deported Tunisian ex-president Moncef Marzouki and European parliament member Ana Miranda after they took part in a flotilla seeking to defy its Gaza blockade, an official said.

‘The (former) president of Tunisia and the Spanish lawmaker flew this morning. There are another 14 who have begun the expulsion process,’ a spokeswoman for Israel’s immigration authority told AFP.

Marzouki, who is widely known as a human rights activist, sailed aboard the Swedish ship the Marianne of Gothenburg as part of a four-boat flotilla that set sail from Europe last month.

Israel commandeered the Swedish-flagged Marianne on Monday and accompanied it to the port of Ashdod.
Sixteen foreign nationals were on board along with two Israeli citizens, Palestinian Knesset member Basel Ghattas and a television reporter.

The two Israelis have been released, though Ghattas could face a parliamentary hearing on whether he should face sanctions.

The four-boat flotilla of pro-Palestinian activists had been seeking to reach the Gaza Strip to highlight the Israeli blockade of the territory that they called ‘inhumane and illegal’.

The three other boats had turned back before the Marianne was boarded by the Israeli navy in an operation that took place without the deadly force that marred a raid to stop a similar bid in 2010.

The activists’ campaign came as Israel faced heavy international pressure over its actions in Gaza, with a UN report last week saying Israel may have committed war crimes during a 50-day conflict in the besieged coastal enclave last summer.

Israel says the blockade is necessary to stop weapons from arriving in the Gaza Strip by sea, but international rights groups say it is collective punishment and has led to a humanitarian crisis for 1.8 Palestinians in the territory.

The reconstruction of thousands of homes destroyed during the fighting between Israel and Hamas, Gaza’s Islamist de facto rulers, is yet to begin, and both Israel’s blockade and a lack of support from international donors have been blamed.

In 2010, 10 Turkish activists aboard the Mavi Marmara were killed in an Israeli raid on a six-ship flotilla.