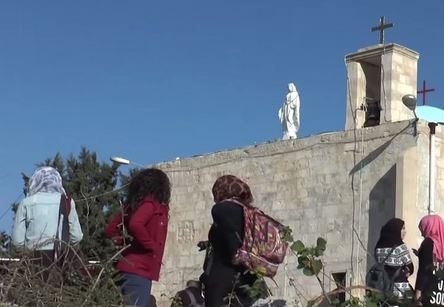 The Israeli police and personnel of the “Israel Land Administration” invaded, on June 29, the local church in the depopulated Christian village of Eqreth, in ‘Akka (Acre), and confiscated all of its furniture and belongings.“We will never give up. We will remain here no matter what,” Father Suheil Khoury said. “This is our church; this is our land that we inherited from our fathers and forefathers. We believe in our Right of Return, and we will remain steadfast.”

Father Khoury told Al-Arab News Agency that officers and an official searched the church, confiscating everything, including chairs and tables, in addition to destroying and uprooting plants in the church compound.

He added that the Israeli government is practicing illegal policies meant to terrorize Palestinians and force them to leave their historic land.

“We are here to stay; this is our land, no matter what they do,” he added. “We always hold protest against the ongoing harassment and violations.”

Al-Arab has quoted the head of the Eqreth Residents Committee, Dr. Ibrahim Atallah, stating that the police even confiscated an electricity cable that is used by the church.

“We grew accustomed to these violations, but they cannot terrorize us,” he said. “We will continue our activities; their attacks will never deter us.”

“Our hope is in our youths in Eqreth to remain steadfast and determined in this blessed land,” Dr. Attallah stated. “One day, we will return to our village, our land.”

Eqreth is a Palestinian Christian village, one of hundreds of Palestinian villages and towns depopulated and destroyed by the Israeli forces prior to the establishment of the state of Israel in the historic land of Palestine.

It is located near 25.5 Kilometers northeast of ‘Akka, on a hill 550 meters above the sea level, and only a few kilometers away from the Lebanese border. Its inhabitants largely took refuge in nearby villages, and in Lebanon, between 1948 and 1951, after repeated attacks by armed Israeli groups.

The only building that it still standing in Eqreth is the Roman Catholic Church, while the internally displaced inhabitants continue to hold both repeated protests, demanding their right to return, and annual summer camps to teach the children about their village, history and steadfastness.