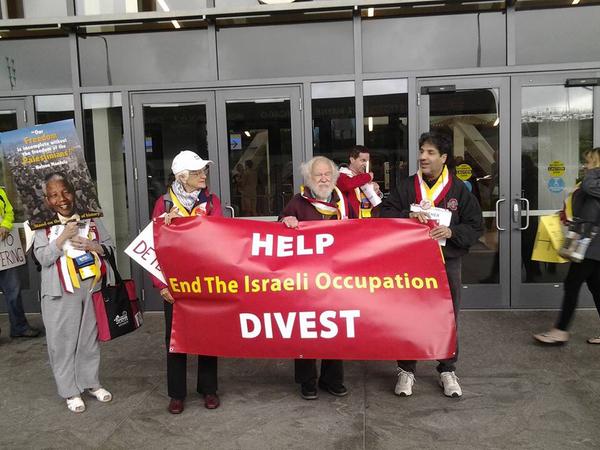 The U.S.-based United Church of Christ voted 508 – 124 on Tuesday to divest from companies involved in the Israeli occupation of Palestine.The divestment resolution passed by the United Church of Christ (UCC) calls for the church to divest from the Israeli occupation, to boycott Israeli settlement products, to persist in pressuring Congress to end unconditional U.S. military aid to Israel, and to study the Kairos Palestine document produced by prominent Palestinian Christians, which calls on Christians around the world to take action to support the basic human rights of the Palestinian people.

The resolution was introduced at the UCC’s Synod (General Assembly) by the United Church of Christ Palestine Israel Network (UCC-PIN), which issued a statement following the vote which quoted Rev. Mitri Raheb, a Christian Palestinian and Pastor of the Evangelical Lutheran Church in Jordan and the Holy Land, who traveled to Cleveland for the synod.

He said, ‘In approving this resolution, the UCC has demonstrated its commitment to justice and equality. For Palestinians living under occupation or facing systematic discrimination as citizens of Israel, enduring the destruction of their homes and businesses, the theft of their land for settlements, and living under blockade and siege in Gaza, this action sends a strong signal that they are not alone, and that there are churches who still dare to speak truth to power and stand with the oppressed.”

South African anti-apartheid activist, Reverend Desmond Tutu, wrote a statement in support of the UCC’s divetment resolution, writing, ‘I affirm your resolution’s condemnation of all violence and your uncompromising commitment to the path of non-violence and inter-religious dialogue. And I commend the resolution’s call for accountability from your own, United States, government over its annual $3.1 billion in military aid to Israel.’

According to the statement by UCC-PIN, the vote, which was 508 in favor, 124 against, with 38 abstentions, was the culmination of a process that began in 2005, to end the Church’s complicity in Israel’s nearly half-century-old occupation and other abuses of Palestinian human rights. It also comes as a response to the Christian Palestinian community’s call for Boycott, Divestment, and Sanctions, as embodied in the Kairos Palestine document, which seeks to achieve Palestinian freedom and rights using peaceful means, inspired by the US Civil Rights and South African anti-Apartheid movements.

In passing Resolution #4, the UCC is following in the footsteps of other large U.S. churches like the Presbyterian Church (USA), which passed a similar resolution last year divesting from Israel’s occupation, and the United Methodists, who voted to boycott products made in Israeli settlements in the occupied Palestinian territories and whose pension board divested from G4S, a prison service company, due in part to its dealings with the Israeli military.

Two more national denominations, including the Episcopalians, will consider boycott and divestment in the coming week.

Next week marks the 10 year anniversary of the Palestinian call for BDS (boycott, divestment, and sanctions) campaigns to hold Israel accountable for its violations of Palestinian rights and international law.