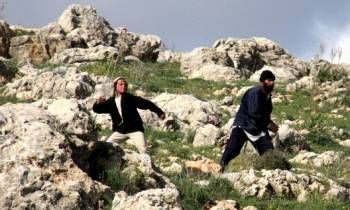 Palestinian medical sources in Ramallah have reported, late on Tuesday evening, that a 60-year-old man was injured, after a number of extremist Israeli settlers assaulted him near the main entrance of his village.The sources said the man, Mahmoud Saleh Nofal, 60 years of age, was assaulted near Ras Karkar village, west of Ramallah, and was moved to the Palestine Medical Center surfing cuts and bruises to various parts of his body.

The assailants sprayed the man’s face with pepper spray, before proceeding to beat him using batons.

Journalist Mohammad Nofal, a nephew of Mahmoud, said the attack took place in an orchard, shortly after seven in the evening, and that the attackers left him bleeding.

He added that his uncle managed to walk to the main entrance of the village, before locals saw him, and instantly moved him to the hospital.