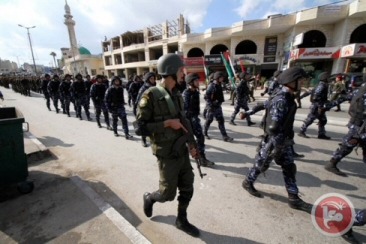 Palestinian Authority security forces detained over 100 Hamas affiliates in the West Bank, overnight Thursday, an official from the Hamas movement said, Friday.According to Ma’an News Agency, Senior Hamas official Izzat al-Rishaq stated that the detentions were a ‘stab in the back’ for Palestinians during the holy month of Ramadan, referring to the move as a ‘favor’ for Israel.

Hamas alleged that the detention campaign by the PA was a response to accusations by Israel that Hamas was behind a string of attacks in the occupied West Bank and East Jerusalem targeting Israeli military forces and settlers over the past two weeks.

Officials from the Fateh movement based in the Gaza Strip condemned summons by Gaza security services for Fateh-affiliates that followed. Fateh called upon Hamas to halt the summons, adding that such targeting leads to an increase tensions in national relationships.

The Fateh-dominated PA and Israeli security forces have worked in coordination since the Oslo Accords in 1993, which planned for a gradual power transfer of the occupied West Bank from Israeli forces to the PA over the next five years.

Over 10 years on, Friday’s back and forth between Fateh and Hamas officials comes as Hamas has frequently accused the PA of aligning with Israel’s security concerns and goals in the occupied West Bank.