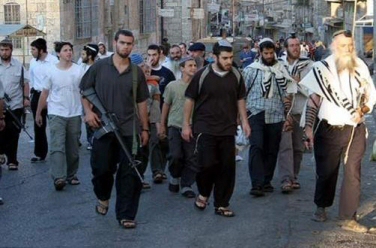 Dozens of settlers, lead by extremist Baroukh Marzel, gathered today near Hebron’s Ibrahimi Mosque in order to protest against the reopening of Palestinian stores.This protest comes after the decision of the Israeli army in Hebron to allow the stores to reopen, after they were closed by military order almost 21 years ago. In the words of Marzel, this decision supports Palestinian ‘vandals’, and will lead to a life of danger for the Hebron settlers.

According to the Palestinian News Network, hundreds of Palestinian shops and warehouses in the heart of Hebron old city were forced to close by the IOF in 1994 – twenty-one years ago – after the Ibrahimi Mosque massacre during which 29 Muslims were killed by Israeli extremist settler, Baruch Goldstein.

Israel promised in 1997 to reopen the street for trade, however this promise fell flat as, 21 years later, the street is still earning its nickname: Ghost Town.