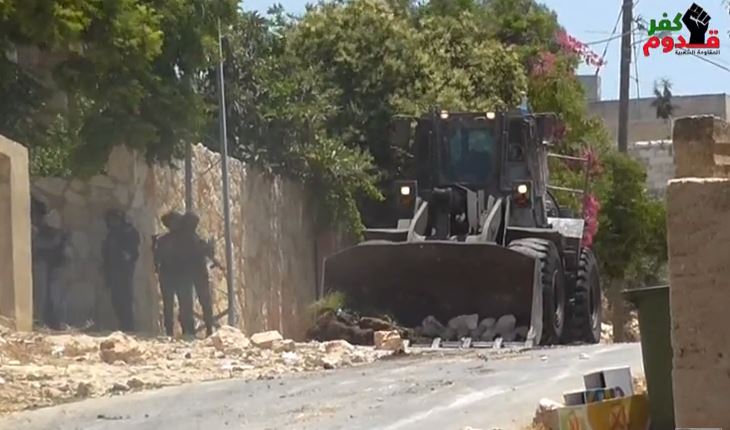 Israeli soldiers invaded, on Friday, Kufur Qaddoum village, near the northern West Bank city of Qalqilia, and attacked the weekly protest, firing dozens of gas bombs and rubber-coated metal bullets; one child was injured, while many residents suffered the effects of tear gas inhalation.The Popular Committee against the Wall and Settlements in Kufur Qaddoum said the child, 12 years of age, was shot with a rubber-coated metal bullet in the head.

Soldiers also broke into and searched several homes, and occupied rooftops to use them as firing posts and monitoring towers.

The Palestinians in the village used an adjusted leaf-blowing machine that produces high levels of smoke, to create a diversion and prevent the soldiers from being able to aim and shoot at them.

The army sprayed the protesters, and local homes, with waste water mixed with chemicals, and fired dozens of gas bombs and rubber-coated metal bullets, during clashes that erupted after the soldiers invaded the village. Local youth hurled stones and empty bottles at the army, blockaded roads with rocks, and burn tires.

Friday marks the beginning of the fifth year of ongoing popular weekly protests against the closure of the village’s main road, the Annexation Wall and Settlements.

The army frequently invades Kufur Qaddoum, and repeatedly surrounds it in addition to frequent abductions of local youths, in an attempt to stop the protests.