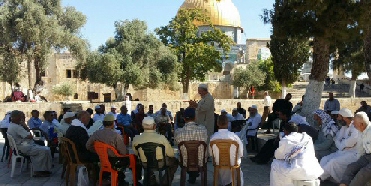 PNN reports that a large number of settlers waiting behind the Mughrabi Bridge were waiting to storm Al-Aqsa, which is used by settlers every morning from Sunday through Thursday. Usually, these incursions are met with Muslim worshipers chanting in protest, followed by the arrest and detention of worshipers in detention and deportation centres for various amounts of time.

Some of these settler groups called for the organisation of mass break-ins to the mosque, this morning, in commemoration of the “destruction of the walls of Jerusalem”, and as a prelude for the upcoming Jewish holiday.

Hundreds of people inside the Palestinian territories and East Jerusalem and the West Bank, last night in the mosque, observed the strong presence of worshipers from the morning, and the intensity of religious acts performed there.