Settlers Reportedly Fired on Near Qalqilia 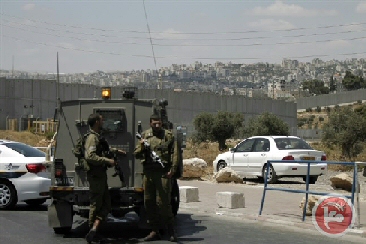 The Israeli army received reports, on Sunday, that the car of an Israeli settler was shot at near the illegal settlement of Kedumim, in the West Bank district of Qalqilia, with no injuries reported.An Israeli army spokesperson told Ma’an News Agency that Israeli forces were searching the area for possible suspects. However, she said that the reports remained unconfirmed and were ‘being looked into.’

Settlers and Israeli military in occupied East Jerusalem and the West Bank have faced increasing attacks from Palestinians in recent weeks.

On Monday, a Palestinian opened fire leaving three Israeli settlers injured and one dead near the West Bank city of Nablus.

The week following was witness to violent reprisals by Israeli settlers throwing stones at Palestinian cars and on Tuesday assaulting a 60-year-old Palestinian man.

The Israeli army has responded by carrying out multiple detention raids and setting up numerous flying checkpoints, restricting Palestinian movement across the area.

Palestinian attacks come as tensions have continued to rise since the start of Ramadan in mid-June, and Israeli military checkpoints have been the site of frequent violence.

On Friday, Israeli forces shot and killed Muhammad Hani al-Kasbah,17, after he allegedly threw stones at an Israeli military vehicle near Qalandiya checkpoint, south of Ramallah.

An average of two Israeli civilians per week have sustained injuries by Palestinians so far in 2015, with two Israelis killed, according to the UN Office for the Coordination of Humanitarian Affairs.

In the same time period, however, an average of 39 Palestinians have been injured by Israeli forces each week, and 15 have been killed.