How Did the War on Gaza Begin? 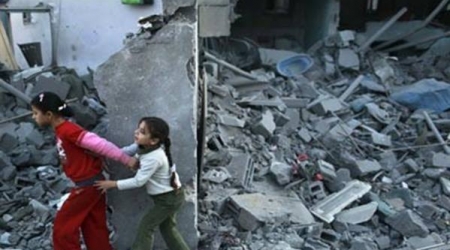 In the early summer of 2014, all the given indicators were pushing for a new confrontation between the Palestinian resistance and the Israeli occupation, notably after the continued Israeli escalations in the West Bank and the Gaza Strip.On the political side, Israel refused to release of the fourth batch of prisoners as it was agreed with the Palestinian Authority (PA) what pushed the PA to sign in a request in early April to join 15 organizations and international treaties in the United Nations. PA had also, signed on 23th of the same month on an agreement of reconciliation with the ‘Hamas’ Islamic Resistance Movement.

While on the field level, three Israeli settlers were kidnapped in Hebron in June 12. In its wake, the Israeli army launched a large-scale military campaign, before they were found dead in the 30th of the same month near Halhul, what blew up Israeli claims of retaliation.

Tension peaked after a Palestinian child Muhammed Abu Khdair, from Shuafat in Jerusalem, was kidnapped, tortured and burned to death at the hands of three settlers on 2 July. In addition to the re-arrest of dozens of ex-prisoners who were freed in 2011 swap deal.

These violations were followed by mass protests in Jerusalem and in the occupied territories in 1948, as well as areas of the West Bank.

The situation intensified after an Israeli settler ran over two Arab workers near the occupied Haifa. This escalation included an intermittent tension in the Gaza Strip, when Israeli occupation assassinated, on Monday 7th of July six members of the al-Qassam Brigades in a raid targeted a ground tunnel east of Rafah, southern the Gaza Strip.

Within 48 hours after launch of the war, ‘Israel’ carried out nearly 500 raids and targeted the infrastructure and sewage networks, electricity and telecommunications, and destroyed 55 houses and targeted a number of governmental buildings.

The war was over in the evening of 26 August, with a cease-fire announced by President Mahmoud Abbas, while Hamas made it clear that the Palestinian negotiating team in Cairo signed an agreement that put an end to the Israeli aggression in accordance with the presented Egyptian initiative.

The agreement included a comprehensive ceasefire, coinciding with the opening of the crossings between the Gaza Strip and ‘Israel’ in order to allow the humanitarian and relief aids and the reconstruction supplies and fishing zone of six nautical miles.