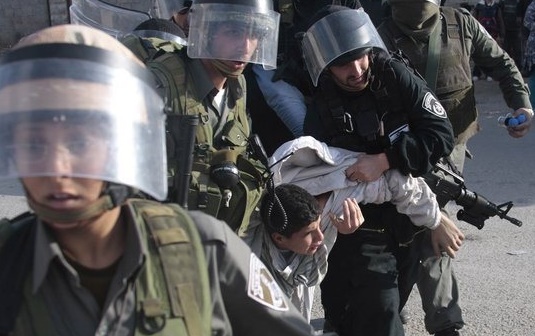 Israeli soldiers kidnapped, on Thursday at dawn, one Palestinian in the northern West Bank district of Nablus, two in Bethlehem, one in Jenin, and one in Jerusalem. Another Palestinian was kidnapped near Hebron, late on Wednesday.Media sources in Nablus said the soldiers kidnapped Hamad Abu Omar, 26 years of age, after stopping him at the Shavei Shomron Roadblock, northwest of Nablus. Omar is from Borqa town, northwest of Nablus.

In addition, soldiers kidnapped a Palestinian, identified as Mo’tasem Nabil Shweiki, 22, after invading his home in the Saff Street, in the center of Bethlehem city.

A third Palestinian, identified as Omar Amer Odah, 23, was also kidnapped after the soldiers stormed his home, in ‘Aida refugee camp, north of Bethlehem city.

In addition, soldiers stationed at a military roadblock, south of the northern West Bank city of Jenin, kidnapped a university student from Jalboun village, east of Jenin.

The Palestinian, Ayham Mahmoud Abu ar-Rob, 23, a college student studying to become a teacher, was stopped on a sudden roadblock near ‘Arraba town.

Soldiers also installed roadblocks and searched cars while inspecting the ID cards of the passengers.

Clashes took place between the invading soldiers and dozens of local youths.

Eyewitnesses said the soldiers cuffed Ekhlayyel, held him in their military tower on the main entrance of the town, and took him to an unknown destination.

Wednesday:
Five Palestinians Kidnapped In Hebron, One In Bethlehem
http://www.imemc.org/article/72175