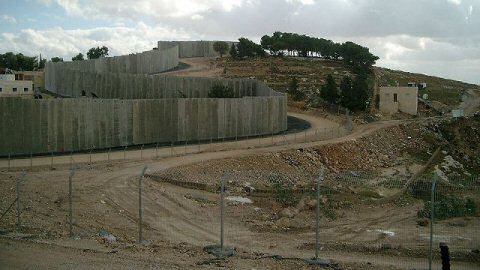 The Ministry of Foreign Affairs, in a statement released on Wednesday, condemned the Israeli government’s decision to build a new section of the Apartheid Wall in the Cremisan valley near the town of Beit Jala.It said the decision allows the confiscation of large swathes of private and state land, undermines the potential of a viable Palestinian state and paves the way for further settlement activities.

“The building [of the fence] is an ‘assassination’ of the principle of a two-state solution in the full view of the world and the different countries,” the statement said, according to WAFA.

In December 2014, the Assembly of Catholic Ordinaries of the Holy Land (ACOHL) called for taking immediate action against extending the separation barrier into the Cremisan Valley.

ACOHL considered that the last hearing held by the Israeli High Court on November 30 2014 “was meant to pressure the residents in order to make a choice between two unacceptable alternatives, both to the community and the Salesian Congregation.”

It maintained that it “stands wholeheartedly with achieving justice in Cremisan and against building the separation wall, which is contrary to international law.”

Contrary to Israeli allegations that the wall is built for security reasons, ACOHL said “the wall is intended by Israel not to achieve security for its pre-June 1967 borders, but to protect the settlements illegally constructed on previously confiscated land in the early seventies and to give more expansion to Gilo and Har Gilo settlements.”

An OCHA 2011 report addressing the impact of the barrier said that, “The Barrier, and related restrictions, has resulted in an increasing fragmentation of territory, including the continuing isolation of East Jerusalem from the remainder of the oPt.”

The Barrier has also cut off land and resources needed for Palestinian land and development, resulting in the curtailment of agricultural practice and the undermined of rural livelihoods throughout the West Bank, it said.

“The civilian population in the oPt has the right to move freely and in safety within, as well as to and from, the West Bank (including East Jerusalem) and the Gaza Strip. Free movement and access, as well as the ability to plan and develop communities, are vital to sustain livelihoods, reduce dependence on humanitarian assistance, and enable economic recovery,” stressed OCHA.

In a different report published in 2013, OCHA stated that, “The vast majority of the wall’s route is located within the occupied West Bank, rather than on the Green Line, separating Palestinian communities and farming land from the rest of the West Bank and contributing to the fragmentation of the occupied Palestinian territory.’

When completed, the Wall will annex some 46% of the West Bank, isolating communities into Bantustans, ghettos and “military zones”, according to the Palestinian Grassroots Anti-Apartheid Wall Campaign.

This means the Palestinian population in the West Bank and Gaza Strip, including almost 1.5 million refugees, will be encircled on only 12% of mandate Palestine.

The Wall is present in the districts of Bethlehem, parts of Ramallah, Qalqilya, parts of Tulkarm and throughout the Jerusalem envelope. It is eight meters high – twice the height of the Berlin Wall – with watchtowers and a “buffer zone” 30-100 meters wide for electric fences, trenches, cameras, sensors, and military patrols.

In other places, the Wall consists of layers of fencing and razor wire, military patrol roads, sand paths to trace footprints, ditches and surveillance cameras.