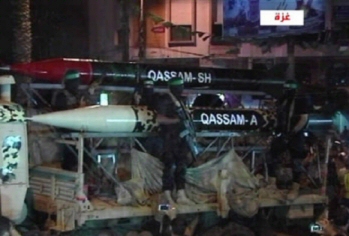 Days of Palestine reports that, as hundreds of people were called to witness the announcement of the two rockets, Al-Qassam Spokesman Abu-Obaida praised Al-Qassam fighters and mourned those martyred during Israeli war on Gaza.

Abu-Obaida said that the two new rockets were given the names of the two most senior Qassam leaders assassinated by the Israeli occupation, during the war; Raed al-Attar and Mohamed abu-Shammaleh.

Brigades members, their faces covered with black Palestinian scarves (Kufiyeh), stood in front of what appeared to be models of two rockets about three to four metres (9 to 13 feet) in length aboard the bed of a military truck.

No more details were about range and warheads were announced.