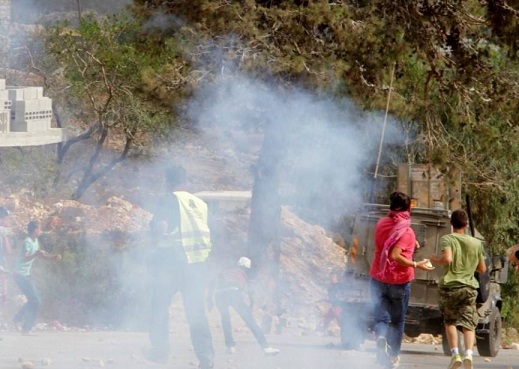 Palestinian medical sources have reported, Friday, that many residents suffered the effects of tear gas inhalation, after Israeli soldiers assaulted the weekly nonviolent protest against the Annexation Wall and settlements, in Nabi Saleh village, near the central West Bank city of Ramallah.The Popular Resistance Committee in Nabi Saleh has reported that the protesters marched towards Palestinian orchards, illegally confiscated by the army, and isolated behind the wall.

The protesters carried Palestinian flags, and chanted for the release of all political prisoners, in addition to demanding the International Community to intervene and end the illegal Israeli occupation of Palestine, and the ongoing violations.

Also on Friday, one child was injured and scores of Palestinians suffered the effects of teargas inhalation, after the soldiers attacked the weekly protest in Kufur Qaddoum village, near the northern West Bank city of Qalqilia. http://www.imemc.org/article/72205

The soldiers also attacked the weekly nonviolent protest against in Bil’in village, near the central West Bank city of Ramallah, causing dozens to suffer the effects of tear gas inhalation. http://www.imemc.org/article/72204