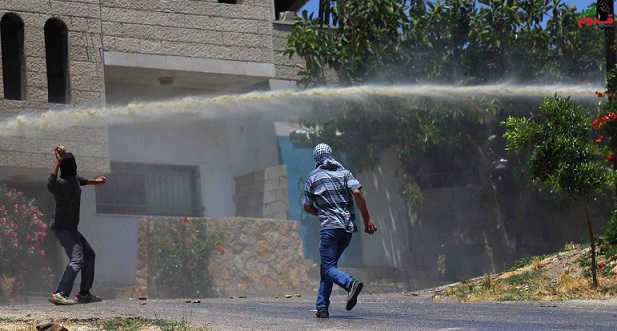 One child was injured by live Israeli army fire, Friday, while scores of Palestinians suffered the effects of teargas inhalation, after the soldiers attacked the weekly protest in Kufur Qaddoum village, near the northern West Bank city of Qalqilia.The protesters marched against the illegal Israeli Annexation Wall and settlements, and demanding Israel to reopen the village’s main road that has been blockaded for the 13th consecutive year.

Coordinator of the Popular Committee against the Wall and Settlements in Kufur Qaddoum Murad Eshteiwy said a large military force, and undercover soldiers, resorted to excessive use of force, and fired dozens of live rounds, in addition to rubber-coated metal bullets and gas bombs.

The undercover soldiers ambushed local youths, and fired live rounds at them, wounding Amjad Najjar, 13 years of age, with a live round in the leg. Medics moved Najjar to the Rafidia Hospital in Nablus.

The invasion led to clashes between the soldiers and local youths, who hurled stones and empty bottles at them.

Eshteiwy added that the soldiers also broke into many homes in the village, violently searched them, and used their rooftops as monitoring towers and firing posts.

He also stated that the soldiers deliberately fired gas bombs at a number of homes, and sprayed them with waste-water mixed with chemicals.

It is worth mentioning that the army surrounded the village, since morning hours, and prevented many journalists and solidarity activists from entering it.