Hamas: No Talks on Exchange Deal 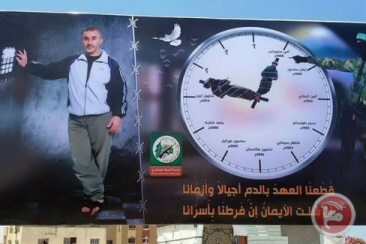 A Hamas leader said Friday that talks will only take place with Israel regarding an exchange deal after Israel releases Palestinians who have been rearrested, despite being released in past prisoner swaps.Hamas’ Ismail Radwan said in a statement that “Israel must pay for everything,’ referring specifically to the Palestinians released during the Gilad Shait Deal in 2011, around 73 of whom were rearrested by Israeli forces in 2014.

The statement came after Israel’s defense ministry announced, Thursday, that two Israeli citizens are allegedly being held by Hamas in the Gaza Strip.

Israeli defense officials told Israeli media Friday that Israel ‘does not intend to free Palestinian prisoners’ in exchange for the two Israeli citizens purportedly being held.

Israel’s defense ministry said Thursday that Avraham Mengistu, an Israeli of Ethiopian descent ‘is being held against his will by Hamas in Gaza,’ adding that a Palestinian Bedouin citizen of Israel is also being held, without releasing further information.

The news was under a gag order until Thursday.

A Bedouin family of the al-Sayed village in the Negev told Ma’an Friday that their 28-year-old relative went missing on April 20 and is believed to be in Gaza.

The family said they had not yet been contacted by Israeli officials regards to the disappearance and had no idea of their relative’s exact whereabouts, adding that the man had disappeared several times over the years and had been safely returned from Gaza twice before.

Israeli media reported that the 28-year-old’s name and ‘other identifying details’ are still under gag order, but said that Israeli defense sources reported that the man crossed the border to Gaza through the Erez crossing and is being held there by Hamas.

Hamas has yet to directly comment on or confirm the allegations.

In 2011, Israel released more than 1,000 Palestinian prisoners in exchange for soldier Gilad Shalit, who had been held by Hamas for five years.

An adviser to late prime minister Yitzhak Rabin reportedly wrote Friday that Netanyahu was anxious to avoid a reprise of the affair, which saw public opinion sharply divided for and against the mass release.
‘The prime minister did not and does not want to repeat the same maneuver in which dozens of life prisoners, who were supposed to take their last breath within the confines of an Israeli prison, were freed,’ Haber wrote.

While the family of the Palestinian Bedouin citizen of Israel has lacked any consultation by the Israeli government at all, Mengistu’s family was reportedly threatened from speaking out about their son’s disappearance.

Mengistu reportedly climbed over the ‘security fence’ seperating Israel from Gaza at an Ashkelon beach last September. He was detained and questioned by Hamas, and later released, according to Israeli media.
Lior Lotan — coordinator of prisoner of war and missing in action affairs in Prime Minister Benjamin Netanyahu’s office — was recorded speaking to the family in effort to prevent them from criticizing how the government had handled the debacle thus far.

‘Anyone who makes Avera into a story about relations between the Ethiopian community and the state of Israel will leave him in Gaza for another year,’ Lotan is heard telling Mengistu’s family, using the name by which he is known to friends and relatives.

‘If we aren’t together, we will make mistakes and Hamas will translate them into another year or another price,’ he said.

Lotan later apologized for his statements after Israeli media condemned the comments as patronizing and insensitive.