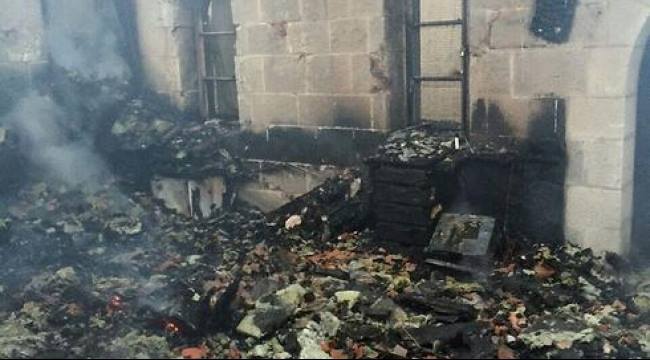 The Israeli secret service (Shin Bet) reported Sunday that they had arrested three men for questioning for the burning of the Chruch of the Loaves and Fishes, where Christians believe that Jesus performed the miracle of multiplying loaves and fishes.

The perpetrators of the anti-Christian attack also wrote graffiti on the walls in Hebrew calling for the ‘destruction of false idols’.Following the arson attack on June 18th, Israeli authorities detained 16 young men briefly, all of them associated with right-wing Jewish extremist groups.

They were all released shortly after being detained. It is unknown if any of the three men now in custody were part of the initial group detained for questioning.

Ten of the young men initially detained for questioning were settlers from Yitzhar, which is known as a bastion of extremists and where residents have been involved in previous hate crimes.

Israeli security forces estimated that the majority of incidents during a 2014 wave of anti-Palestinian hate crimes were carried out by Yitzhar residents, according to reports by Israeli media site Haaretz.

The burning of the Loaves and Fishes Church, known also as the Church of the Multiplication, received wider international publicity than the numerous other attacks on holy sites carried out by Israeli Jewish extremists over the last several years. The vast majority of these hate attacks have gone uninvestigated, with no one ever charged or prosecuted.

The three men arrested on Sunday have not been charged with any crime, but have been taken to a Shin Bet center for interrogation.

The church is located in northern Israel, on the northwestern coast of the Sea of Galilee, in the town of Tabgha. It is run by Palestinian Christians, as well as nuns and monks from other countries around the world. Two people, a nun and an international volunteer, were injured during the arson attack on the church.

The church suffered from several hundred thousand dollars worth of damage from the fire. It has also been closed since the attack – it is usually visited by around 5,000 visitors a day.