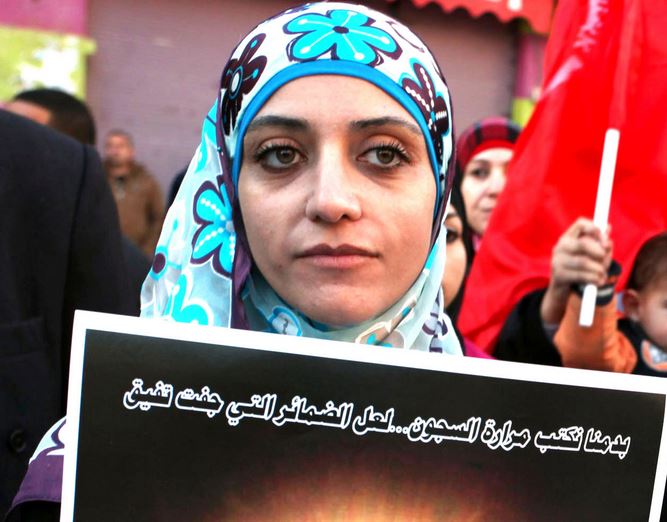 Lawyer Hanan al-Khatib of the Palestinian Detainees’ Committee has reported that detained lawyer, Shireen al-‘Isawifaced very difficult conditions in solitary confinement for more than two months. Al-Khatib managed to visit al-‘Eesawy who told her that she was moved into solitary confinement two months ago after an argument erupted between a number of Palestinian detainees and prison guards in the Ha-Sharon prison for women.

The imprisoned layer said she went on hunger strike between June 15 and June 22, and that she was also placed in solitary confinement in her cell, when she was held in the Ramla Israeli prison.

“The cell was too small; its door sealed shut. They even sealed the door with plastic,” she stated, “I couldn’t breathe and fell unconscious before they removed the plastic to allow some air through.”

“I had no sheets or covers. I had to sleep on the ground; they even confiscated all of my belongings,” the detained lawyer said, “The cell has no sink and is completely unfit for human use. Whenever they took me to see my lawyer, or whenever I was shortly allowed into the prison yard, the soldiers always cuffed me, and chained my legs.”

She also said that,every time the soldiers move the detainees to court, they start the transfer around three at dawn, and return them back to prison around one after midnight the next day.

“They make sure the entire process is very exhausting to us,” al-‘Isawistated, “They deliberately deny us right to sleep, or even to rest.”

The detained lawyer was kidnapped on June 3, 2014, and the Israeli High Court repeatedly refused to release her on bail.

Al-‘Eesawy has been repeatedly kidnapped and imprisoned by Israel, and was one of more than a thousand detainees who were released, in October 2011, under the Shalit prisoners swap agreement, that also secured the release of capture soldier Gilad Shalit.

On March 6, 2014, both Shireen and her brother Medhat al-‘Isawi, who is also a lawyer, were kidnapped along with many lawyers in occupied Jerusalem.

The lawyers were released on bail, while the Israeli Internal Security demanded keeping Shireen in prison for what they called “smuggling letters to Palestinian detainees,” from their families in the Gaza Strip.

Following her abduction, al-‘Isawiwas moved to the al-Maskobiyya interrogation center in Jerusalem, and was forced into solitary confinement, in addition to intense interrogation for thirty days, each day from 10 in the morning until after midnight.

On Tuesday, June 16 2015, Shireen declared a hunger strike. She was then remanded for six months, for further interrogation, as Israel claimed she “provided services to organizations and groups that present a threat to Israel’s security.”

Shireen is the sister detainee Samer al-‘Isawi, who was sent to court on May 10 2015, where the judge reinstated his original 30-year imprisonment term for “violating the terms of his release.”

On Monday December 23 2013, Samer was released after being held for 17 months; the agreement for his release came after his historic 277-day hunger strike.

In June 0f 2014, Israel recaptured at least 50 ex-detainees that were released in the 2011 prisoners exchange agreement, al-‘Isawiwas among the kidnapped.

Most of them remain either held under administrative detention – without indictment or trial – or are still awaiting military court ruling.