Army kidnaps Six Palestinians In Hebron, One In Bethlehem 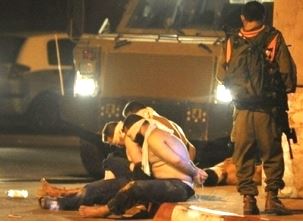 Soldiers also invaded the Deheishe refugee camp, south of Bethlehem, and handed Fares al-Hasanat, 35 years of age, a military warrant for interrogation in the Gush Etzion military and security base.

Clashes took place between the invading soldiers, and scores of local youths who hurled stones and empty bottles on them.

The army also invaded Ethna town, west of the city, and kidnapped one Palestinian, after breaking into his home and violently searching it, causing property damage.

The kidnapped Palestinian, identified as Ismael Talab an-Nattah, 38 years of age, lives in the al-Qarna’a area, in the center of Ethna.