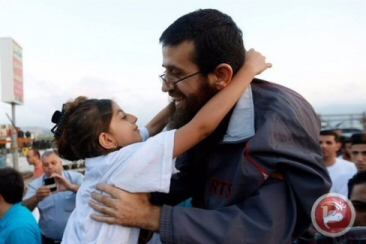 Israeli authorities have released Khader Adnan for the second time in two days after midnight, Monday, after briefly rearresting the veteran Palestinian hunger striker in East Jerusalem, just a day after he was released from 11 months in prison.The Palestinian liaison office moved Adnan from an Israeli detention center to Beitunia west of Ramallah at around 1 a.m., and he was then taken by car to his home village of Arraba in southern Jenin.

He was detained on Monday evening as he was heading into Jerusalem’s Old City to take part in Laylat al-Qader prayers and it was found that he did not have the necessary permits.

Israeli police held him for several hours for questioning before they decided to release him.

The Palestinian liaison office said they were satisfied with Adnan’s health following the detention.

Laylat al-Qader, meaning the Night of Destiny, takes place toward the end of the holy month of Ramadan, and according to Muslim belief marks the night the first verses of the Quran were revealed to the prophet Muhammad.

Thousands of Palestinians were expected to visit Al-Aqsa mosque compound to mark the occasion, although Israel laid down stringent access restrictions ahead of it.

Women between 16 and 30 also required permits to enter the city.

The Israeli authorities previously agreed to release Adnan in the early hours of Sunday after they struck a deal to end a 55-day hunger strike he began in June to protest the Israeli practice of administrative detention.

He was kidnapped in July last year, and was held under arbitrary administrative detention orders, without charges, for the 10th time in his life.

His hunger strike, which brought him near death by the time it concluded last month, was the second he undertook, following a 66-day long hunger strike in 2012.

The deal struck with Israel on June 29 was only possible after Adnan withdrew his demand that Israel agree to never place him under administrative detention again.