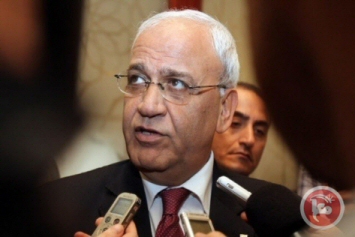 Senior Palestinian official Saeb Erekat took office as secretary-general of the PLO on Monday, prompting speculation he is being lined up to succeed Mahmoud Abbas as Palestinian president.Erekat, who has served on the PLO negotiating team on-off for more than two decades, replaced Yasser Abed Rabbo after he was dismissed nearly two weeks ago, according to Ma’an.

The position of secretary-general is second only to that of chair — held by Abbas — within the PLO Executive Committee, and media reports suggested that the promotion is a vote of confidence in Erekat as a future leader.

However, Ashraf Khatib, a senior adviser for the PLO negotiations affairs department, said that there was ‘no fact behind’ the speculation.

He said that Erekat’s current priority would be focused on the PLO and ‘restructuring’ its internal organization.

He said that it was ‘up to the decision of the Palestinian leadership and Fatah’ whether Erekat would later run in presidential elections.

Abbas was popularly elected as president in 2005, but in the absence of elections he has remained in power long after his term ended in 2009.

Erekat said Monday that it was necessary to activate all bodies of the PLO, and for the Palestinian National Council to convene as soon as possible.

He said: ‘All factions and parties should join the meeting so as to agree on a comprehensive national plan which helps us stand in the face of the Israeli occupation’s settlement project.’

Abed Rabbo, who Erekat replaced, was fired from his post nearly two weeks ago following a decision by the PLO Executive Committee.

Abed Rabbo told reporters Sunday that he had been dismissed without a vote by the committee in a move that was ‘harmful not only to me but to the organization.’

The reasons for his dismissal remain unclear, although Israeli media reported that Abed Rabbo had been involved in a ‘conspiracy’ with former Palestinian premier Salam Fayyad and former Fatah leader Muhammad Dahlan to ‘undermine Abbas.’

Based on unnamed sources, Israeli newspaper the Jerusalem Post reported earlier this month that Abed Rabbo ‘recently visited the United Arab Emirates, where he held secret talks with Dahlan.’

Once a leading Fatah figure who headed Gaza’s powerful security apparatus, Dahlan fell from grace in June 2007 after the humiliating rout of his forces by Hamas in deadly week-long street battles which saw the movement expel Fatah from the coastal enclave.

Meanwhile, the Palestinian Authority last month seized the funds of an NGO run by former Prime Minister Fayyad without giving any reason, although a Palestinian court later cancelled the seizure.
The Jerusalem Post alleged that ‘the former prime minister had received large sums of money from the UAE.’

The report said that Fayyad, Dahlan and Abed Rabbo ‘had formed an alliance in a bid to undermine or topple the PA president.’

Abed Rabbo on Sunday said that he was greatly upset by the conspiracy claims, and dismissed the notion that the UAE would take part in such plans, saying that they supported the Palestinians in every possible way.
He said Israel lay behind the accusations.

Erekat and Abed Rabbo both came to prominence in Palestinian politics around the time of the Oslo Accords, which led to the creation of the Palestinian Authority.