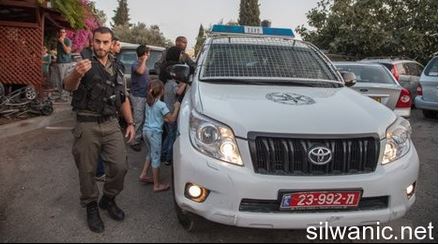 Israeli soldiers invaded, on Wednesday at dawn, the ath-Thoury neighborhood in Silwan town, south of the Al-Aqsa Mosque, in occupied East Jerusalem, and kidnapped four family members. The army also kidnapped two Palestinians from Bethlehem and Jenin.The Jerusalem Detainees’ Committee has reported that dozens of soldiers invaded the ath-Thoury neighborhood in an attempt to kidnap a Palestinian, and clashed with local youths.

The army then kidnapped Amjad, 20, Talab, Zackariah and Ahmad Edrees, after repeatedly kicking and beating them, and moved them to the al-Maskobiyya interrogation facility.

The army also invaded Hizma town, north of Jerusalem, in addition to Tarqoumia town and Hebron city, in the southern part of the West Bank.

On Tuesday at night, soldiers kidnapped a Palestinian, identified as Ahmad Nabil N’eirat, from Meithaloon village, southwest of the northern West Bank city of Jenin, after stopping him on a sudden roadblock near Qalqilia.