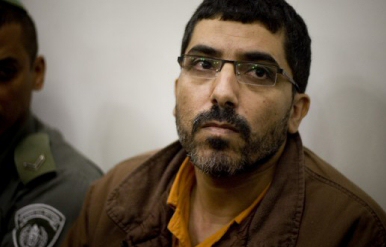 On Tuesday, an Israeli court sentenced Dirar Abu Sisi, a rocket engineer and director of Gaza’s sole power plant — destroyed last year by Israeli missiles — to prison for 21 years. According to JPost, the reason for the sentence was for assisting Hamas improve its rockets.The 46 year old engineer pleaded guilty to five counts which included membership of a militant organization and assistance with missile construction, PNN reports.

Initially, Abu Sisi denied all five counts and Hamas urged that he was not a member of their organization. However, after an amended indictment which led to the plea bargain and the conviction, Abu Sisi accepted the charges.

The Israeli court ruling said that “There is no dispute over the severity of the accused’s actions. He was one of the top people involved in improving the destructive ability of Hamas’s munitions and rockets and he was dominant in facilitating Hamas’s ability to strike Israeli soldiers and civilians more effectively.”

Abu Sisi has been under Israeli detention for four years now. During his imprisonment, he suffered through extended solitary confinement, torture, and humiliation from IOF and has been repeatedly prevented from speaking to his Ukrainian wife and six children.

Israeli sources claim he was the commander as well as senior partner in the production of missiles and mortars for Izz al-Din al-Qassam Brigades — the military wing of Hamas. The Israeli court also claims that he participated in developing the range of resistance rockets.

The indictment against Abu Sisi was first served in April 2011, when he was abducted from the Ukraine by the Israeli secret service, Mossad. Since then, the court has produced evidence and heard from many witnesses.

Under the plea bargain, the prosecution would include a sentence of 21 years imprisonment.

According to a source from Ha’aretz, the official reason for the plea bargain is the difficulty in producing visual evidence that would prove the charges of attempted murder.