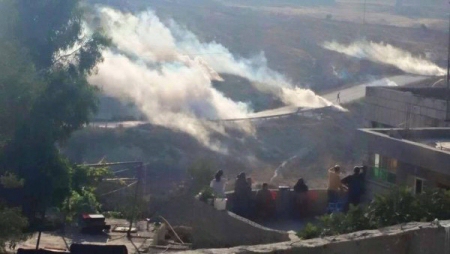 Israeli soldiers attacked, on Friday, the weekly nonviolent protest against the Annexation Wall and settlements in Nabi Saleh village, northwest of the central West Bank city of Ramallah, and kidnapped one teenager. Nabi Saleh television reported that the soldiers kidnapped Walid Dhifallah, 18 years of age, and took him to an unknown destination.

The army attacked the weekly protest and fired several rounds of live ammunition, in addition to rubber-coated metal bullets and tear gas bombs.

Soldiers also attacked the weekly protest in the al-Ma’sara village, in the West Bank district of Bethlehem, and assaulted the villagers and their supporters at village entrance and, then, forced them back using rifle butts and batons; no injuries were reported.

Also on Friday, the soldiers attacked the weekly nonviolent protest in Bil’in, near Ramallah: http://www.imemc.org/article/72276

One Palestinian was shot with a live round, after the soldiers attacked the weekly protest in Kufur Qaddoum, in the northern West Bank district of Qalqilia: http://www.imemc.org/article/72275

Details and photos at the International Solidarity Movement.