Including One Woman, Soldiers Kidnap Four Palestinians In Jerusalem 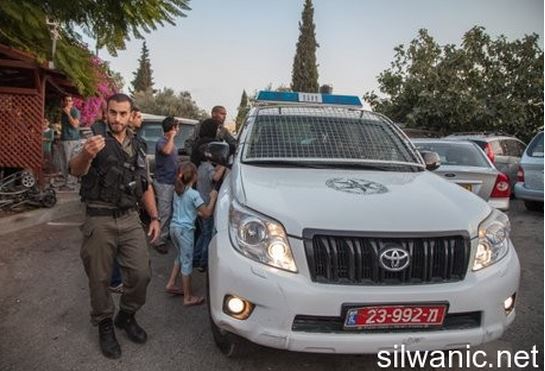 Soldiers also kidnapped Osama Barham, 40, in front of the District Court in Jerusalem, as he headed there to turn himself in.

Silwanic said the army stormed Barham’s home twice, on Sunday, searched his property for what the soldiers said, “incitement materials,” and ordered his family to inform him to head to a security center for interrogation.

The Ad-Dameer Prisoners Support and Human Rights Association has reported that Tawfiq Daoud Abu Esbeitan was remanded until after the prosecution presents its case.

It added that Fathi Nasser, Suleiman Qara’in and Noureddin Zaghal, were remanded until Tuesday, Amjad Edrees until Thursday, while Firas Mahmoud and Majd Sbeitan until August 5.

On Sunday at night, and on Monday at dawn, soldiers kidnapped four Palestinian teenagers in Silwan town, in occupied East Jerusalem. http://www.imemc.org/article/72289