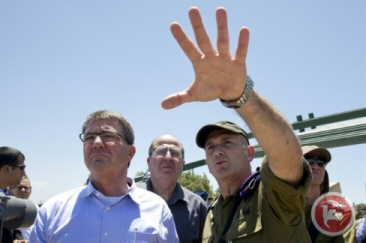 US Defense Secretary Ashton Carter, on Monday, signaled that Washington was ready to boost military cooperation with Israel, during a visit aimed at easing Israeli concerns over the nuclear deal with Iran.Israel was Carter’s first stop on a regional tour following last week’s historic agreement between Iran and world powers, intending to reaffirm the relationship between the two countries despite frictions over the accord.

According to AFP, Israeli Prime Minister Benjamin Netanyahu has condemned the deal with Iran, claiming it is not enough to keep Iran from obtaining nuclear weapons.

He has also indicated that military force remains on the table to prevent Iran from obtaining nuclear weapons, though experts say unilateral strikes by Israel appear highly unlikely.

Despite the tension, Carter said Israel remained ‘the bedrock of American strategy in the Middle East.’
At a joint news conference with Israeli Defense Minister Moshe Yaalon, he noted aspects of military aid the United States already supplies to Israel and said ‘there is a lot more that we can do’ related to cooperation.
‘We will continue in that tradition in improving our joint capabilities, our joint readiness, our joint planning,’ he said.

Yaalon expressed concern over militant groups Iran is accused of backing, such as Hezbollah in Lebanon, arguing that the expected lifting of sanctions will worsen the problem.

‘We have to look at it very carefully because they are going to have more money in the current situation,’ he said.

Carter also visited Israel’s northern border with Lebanon for an assessment of the threat it says Hezbollah poses.

Israel is believed to be the only country in the Middle East with atomic bombs, although it has never confirmed that and is not signatory to the Nuclear Non-proliferation Treaty.

The United States grants the country about $3 billion in military aid annually in addition to spending on other projects, such as the Iron Dome missile defense system.

While there have been suggestions that Israel could receive additional compensations, Netanyahu has so far shown no sign of tempering his rhetoric.

Israeli army radio cited defense ministry officials as saying they were ready to begin discussing such compensation, but Netanyahu has been hesitant because he believes it would signal acceptance of the agreement.

On Monday, the UN Security Council unanimously adopted a resolution endorsing the Iran deal, and the prime minister lashed out at the move, claiming ‘this agreement brings war closer.’

‘First, because Iran will receive hundreds of billions of dollars and it is already openly declaring that it will use this money to finance and arm its terrorist movements and its aggression in the region and around the world,’ Netanyahu told parliament.

‘Second, there will be a nuclear arms race in the Middle East.’

Under the July 14 agreement, Iran has agreed to dismantle or mothball much of its nuclear industry in return for an easing and eventual lifting of sanctions.

World powers have called it an historic opportunity to set relations with Iran on a new path.

On his flight to Israel, Carter said the deal does not preclude the use of military force to stop Iran from obtaining nuclear weapons, though the agreement is designed to resolve the issue diplomatically.
Netanyahu will now turn his attention to the US Congress, which has 60 days to review the agreement.
Carter is due to meet Netanyahu on Tuesday before travelling on to Jordan and Saudi Arabia.