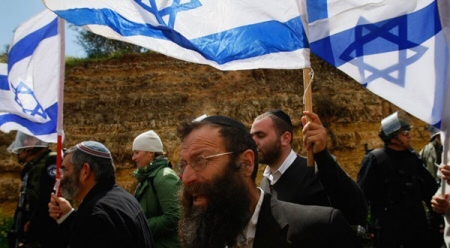 Dozens of settlers, yesterday evening, carried out two provocative marches near to Basajut settlement and Bet El settlement, northeast of Ramallah, and a third march near Shilo and Aili settlements, south of Nablus.PNN reports that, according to official sources, dozens of settlers participated in an incendiary march from Shilo settlement to Aili on the main road north of Ramallah, under the protection of Israeli forces, carrying banners threatening another war on Palestinians.

The sources added that soldiers spread out over the main road from Senjel village to eastern Laban and Qariyout, in order to give protection to the settlers as they attempted to incite clashes with Palestinians by way of provocative chants and threats.

Clashes reportedly broke out between the settlers and families from eastern Laban village. A Palestinian man in his twenties, Nadem Adnan Daraghmeh, was abducted by settlers in Laban, as well as Ahmed Abdulkarem Daraghmeh.

The settlers vandalised several Palestinian properties in eastern Laban, and attempted to force entry into a gas station on the main road and attack the workers. They were, however, prevented by civilians.