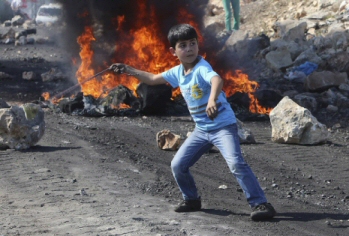 Israeli Knesset passed, on Monday evening, a bill allowing Palestinian youth caught throwing stones to be held up to 20 years in prison.The bill stipulates that youth who throw stones at Israeli vehicles can be sent to prison for up to 10 years, even without having to prove harmful intent in their actions.

The bill won the approval of 69 MKs and was opposed by 17, following a stormy Knesset debate.

She added, according to Days of Palestine: “A stone thrower is a terrorist, and only an appropriate punishment can be deterrent, punitive and just.”

Arab MK of the Joint List Jamal Zahalka slammed the bill, labelling it hypocritical and unjust.

“Imagine bringing before a truly just judge the stone thrower as well as those responsible for him throwing the stones. Who would the judge put in jail? The one destroying [the stone thrower’s] home, expropriating lands, killing his brother, or the boy who threw a stone?” he asked.

“You are picking on the person who responded to the major injustices, such hypocrisy,” he said, during the heated discussion of the bill.

“Those who demolish homes receive medals, but the boy who’s anger is justified is imposed with punishments,” he said. “There is no justice in this law.”