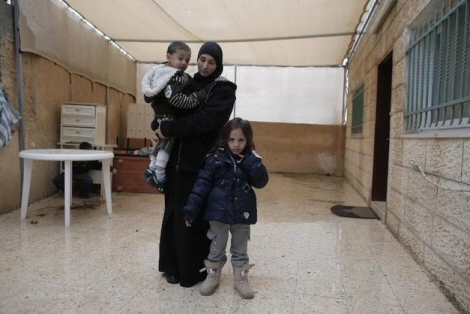 The Israeli Supreme Court, on Wednesday, gave the family of a Palestinian man involved in an attack in Jerusalem until the beginning of October to leave to the occupied West Bank.Ghassan Abu Jamal, 32, was killed by Israeli forces on Nov. 18, 2014, after him and his cousin, Uday, killed four rabbis and a policeman in a synagogue in West Jerusalem.

Ma’an News Agency reports that the Jerusalem residency of Ghassan’s wife, Nadiya, was revoked by Israeli authorities in May and she was ordered to move back to the West Bank where her family resides.

The Hamoked Center for the Defense of the Individual had then presented an appeal to the Minister of Interior and the Supreme Court to allow Nadiya to stay in Jerusalem with her three children on the grounds that the three had no relation to the attack.

The court refused the appeal and instead ruled that the children would be sent to the West Bank as well, ruling that the mother gained custody after the death of her husband.

Ghassan’s brother Muawiya said that the appeal had stressed the importance of keeping the family’s children, Walid, 6, Salma, 4, and Muhammad, 3, with their mother in Jerusalem.

Nadiya is from the town of al-Sawahra al-Sharqiya south east of Jerusalem and holds a West Bank ID card.
She married Ghassan in 2002 and applied for a reunion paper but was rejected until she received the approval for “residency and permit” in 2009 that enabled her to live in Jerusalem, as long as the permit was renewed every year.

Israeli policies make it near-impossible for Palestinians to obtain residency status in Jerusalem, and difficult for those who have it to retain it.

The residency status of 107 Palestinian residents in East Jerusalem was revoked in 2014, adding to the 14,309 Palestinians who have lost residency since 1967 despite being from the area.

Such revocations are part of Israeli policy in East Jerusalem which aims to maintain a 70 percent Jewish majority in the city, according to Israeli rights group B’Tselem.

Prior to Wednesday’s order to permanently revoke the family’s residency, the Abu Jamal family faced threats of home demolition to their East Jerusalem home.

Ghassan and Nadiya’s three children, though allowed to remain in East Jerusalem at the time, were denied social benefits by Israeli authorities after November’s attack.

“Israel claims to be democratic while deporting children from their home and separating them from their family,’ Nidaya said after the court ruling Wednesday.

‘We live in shock and pain ever since Ghassan was killed, with orders to demolish our home and cancel the reunion and residency, and preventing my children from having their health insurance,’ she added.

Over the past two months, Israeli forces have entered and raided the homes of Ghassan and Uday Abu Jamal in the Jabal al-Mukabbir village of occupied East Jerusalem several times.

The forces reportedly searched and took photos of the homes as well as of all family members during such raids, the families say.

At the beginning of July, Israeli forces sealed off the home of Uday with steel boards and later destroyed a tent provided by the International Committee of the Red Cross for the displaced family to live in.

Israel stopped punitive house demolitions in 2009 but resumed the practice last November when Israeli forces razed the house of a Palestinian man that killed two Israelis by running over them with his car last October.
Israeli rights group B’Tselem said in response that punitive house demolitions are ‘fundamentally wrong’ and contravene ‘basic moral standards by punishing people for the misdeeds of others.’

Watch dogs have widely criticized the Israeli policy saying that it contributes to a cycle of violence and merely inflicts collective punishment on family members.