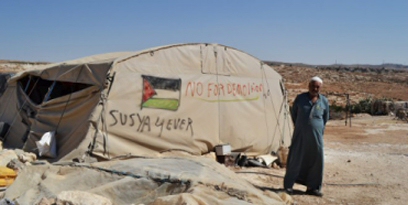 This week, the United Nations’ Development & Humanitarian Coordinator for Palestine, Robert Piper, visited the village of Susiya to learn about the hardships and anxieties of the community under threat of demolition.During his visit, Piper was accompanied by other humanitarian partners and senior diplomats from the governments of Norway, Switzerland and Italy.

“The destruction of private property in an occupied territory is prohibited under international humanitarian law. I call on the Israeli authorities to suspend all demolitions of Palestinian structures in Area C and to provide its residents with a planning and permit regime that allows them to meet their need,” Piper said.

According to the PNN, Piper stressed that the international community cannot turn a blind eye and witness these acts in silence.

“Susiya is emblematic of a pattern of injustice that is repeating itself across many parts of the West Bank. Too many communities are coming under multiple threats and intimidation — by legal process, by bulldozer, by settler violence — to relocate completely or relinquish surrouding agricultural and grazing lands on which their livelihoods depend,” he urged.

Some of the families in Susiya at risk of eviction, have been subject to three waves of demolitions and displacements since 1986. A settler outpost now stands at the site of their initial displacement, which was classified as an archaeological site by the Israeli authorities at the time, requiring the displacement of the community.

At their current site, successive attempts by the community to have a spatial plan and building permits approved have been rejected. A petition against the latest rejection will be heard by the Israeli High Court of Justice on August 3rd.