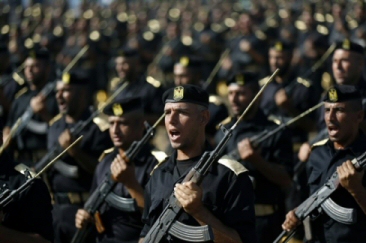 The armed wing of Hamas opened its Gaza summer camp, Saturday, aiming to provide basic combat training for 25,000 Palestinians in the embattled coastal enclave.Hamas, the de facto power in Gaza, is reportedly engaged in indirect contacts with Israel to try to reach a long-term truce, but a year after last summer’s devastating 50-day war the militant movement has kept up the fighting talk.

‘The goal of these military training camps is to train the vanguard for liberation — spiritually, intellectually and physically — to be ready and able to play its role in liberation,’ said a statement by the Ezzedine al-Qassam Brigades, Hamas’ military wing.

According to AFP, it said that participants, aged 15-60, would spend two weeks being ‘trained in military techniques and in firing live ammunition’ as well as ‘first aid and rescue techniques.’

As with all the brigades’ activities the camps will be conducted out of public and media sight.
Rescue squads dealt with thousands of local victims during the war of July-August 2014, the third in Gaza in six years.

Hamas has long run summer camps devoted to sport and study of the Koran in Gaza but over the winter the al-Qassam brigades launched a new kind of camp, giving military training to 15 to 20-year-olds.
Human rights activists condemned it as a forced militarization of Gazan society and a violation of children’s rights.

Brushing off the criticism, the brigades are repeating the exercise with the summer camp, while raising the upper age limit to 60.

The group’s steadfast approach to resisting the ongoing Israeli occupation has gained criticism in the past.

The conduct of Hamas during last summers’ war was probed by a UN Commission of Inquiry, which criticized Palestinian factions of ‘indiscriminate’ firing of thousands of rockets and mortar rounds at Israel, which it said appeared to be have been intended to ‘spread terror’ among Israeli civilians.

Hamas welcomed the report and has pledged to cooperate with the International Criminal Court.

The group views the potential court hearings as a venue to seek justice and enter into what it has termed a ‘legal battle’ with Israel, which is also facing charges of war crimes from the international body.

Over 2,200 Palestinians, mostly civilians, were killed during last summer’s war, while 73, mostly soldiers, were killed on the Israeli side.

Large swathes of the Gaza Strip remain in ruin, with 18,000 homes completely or severely destroyed during the conflict, and more than 100,000 Gazans still homeless.

Amnesty International in April also accused Hamas of war crimes, but the group rejected the report, arguing for the right of Palestinians to defend themselves against both the ongoing Israeli occupation and Israeli military offenses.

‘War crimes have clear specifications, according to the Rome Statute, that do not in any way apply to the Palestinian resistance, which was, is, and will defend its people,’ Hamas responded to the report.

Al-Qassam Brigades said in March that it had recovered from Israel’s offensive last summer and was ‘not afraid’ of confronting the occupation again.

The Gaza Strip has remained under a tightly-controlled land, sea, and air blockade since 2007.

Rights groups and the international community have repeatedly called for Israel to lift the blockade to ease the current humanitarian crisis, warning that its continuation will promote further unrest in the strip.