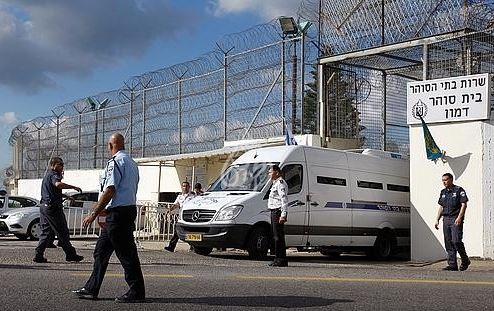 The Palestinian Detainees Committee has reported that undercover soldiers invaded, Monday, several rooms where Palestinian detainees are held in Nafha Israeli detention camp, assaulted dozens of them, and transferred many to different prisons.The Committee said that Special Forces of the Dror and Metzada brigades carried out the attack by breaking into the rooms, before assaulting the detainees.

It added that the detainees protested the assault, and the forcible transfer, and burnt a number of rooms in the prison’s old section.

The tension, and subsequent clashes, started when the soldiers invaded the rooms in Section 10, during early morning hours, where Gaza Strip detainees are held, and moved them to different sections, in addition to conducting thorough searches of all rooms.

The detainees also burnt room #85 in section 13 in the Nafha prison, after the Metzada and Dror brigades invaded it and attacked them while searching their belongings.

The Palestinian Prisoners Society (PPS) has reported that the administration in Nafha is also threatening to move the detainees to different prisons.

All detainees in section 10 in Nafha have been moved to sections 1 and 2, while the prison administration said its campaign would include all prisons and detention camps, the PPS added.