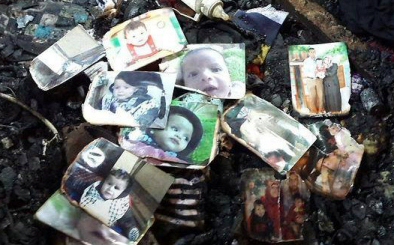 Minister of Justice Counsel Saleem Saqa Friday announced the results of 18-month-old Ali Dawabsheh’s postmortem report, which confirmed that the toddler was alive when burnt to death.In a press statement, Saqa reported soot had been found in Ali’s respiratory canal, which meant he had inhaled this material while he was burnt alive.

According to WAFA correspondence, the toddler’s body was charred and his features were indistinguishable. Parts of his ribcage and lung were melted and charred. The cause of death as revealed by the autopsy report is severe fire burns and their complications.

Saqa described the killing of Dawabsheh as heinous and is the result of the Israeli government’s far-right policy that supports settlers and their terrorism, settlement expansion and incitement against Arabs, which lead to increasing violence and tension in the region.

The minister had ordered the forensic crew to investigate the killing and determine the cause of death, in order to document the crime and take the appropriate legal steps at international forums.

He called on Palestinian families to cooperate with forensic teams to be able to carry out their work in performing autopsy, which helps document such cases and assists in filing lawsuits and trying the criminals.
Israeli settlers killed Ali and seriously injured his entire family, during an attack that targeted two homes in the village of Douma, south of Nablus.

Ghassan Daghlas, a Palestinian official who monitors settlement activities in the West Bank, said that Israeli settlers from nearby illegal settlements deliberately started the arson.

The baby’s father, Sa’ad Dawabsheh, his mother Riham and his 4-year-old brother Ahmad sustained third degree burns and were transferred to several hospitals in the city of Nablus to receive immediate medical care before being transferred again to hospitals in Israel.

Daghlas said a group of masked people, most likely settlers, attacked the two homes closest to the village’s entrance. They smashed the window of the bedroom in one house and tossed a firebomb inside, burning the premises and killing the toddler.