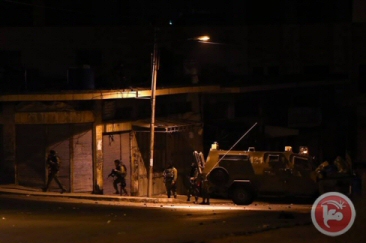 Israeli settlers, Saturday morning, attempted an attack on Palestinian farmers in village of Qusra, south of Nablus, in the occupied West Bank, a local official said.Dozens of settlers from the illegal Esh Kodesh outpost descended on farmers in their fields between the outpost and Qusra, said Ghassan Daghlas, a Palestinian official who monitors settlement activity in the northern West Bank.

According to Ma’an News Agency, he said that the attackers intended to scare the farmers and push them to abandon their fields.

The settlers and locals clashed and threw stones at one another until the settlers were forced to move back.
In June 2014, villagers from Qusra held more than 15 settlers captive after they raided the village and tried to uproot Palestinian olive trees. Shortly after that they were transferred to Israeli military forces via Palestinian liaison officials.

Since 1967, Israel has established over 150 settlements and some 100 outposts in the occupied West Bank, with a settler population of more than 500,000 across the West Bank and East Jerusalem, in contravention of international law.

Outposts like Esh Kodesh are often established by Israeli settlers who set up tents or small mobile homes on private Palestinian land.

Some settlers act without approval to expand settlements or create new ones in the West Bank, building outposts that are illegal even by Israeli government standards.

In many cases, these settlement outposts are ‘legalized’ by Israel, and in rare cases they are dismantled. Such outposts generally receive armed protection by Israeli forces.

Residents living throughout the Nablus district have witnessed a massive spread of outposts and settlements in the area in recent years.

In February, Israeli settlers set up five mobile homes near Palestinian land and close by the Esh Kodesh outpost.

Many of the attacks are intended to make life difficult for locals in order to force them to leave and allow settlers to expand their settlements.

Settlers living in the Nablus region have become notorious for violent and extremist behavior against local Palestinians that is often carried out in the presence of Israeli military forces and rarely investigated by Israeli authorities.

Also on Saturday, dozens of protesters from the Balata refugee camp in Nablus threw rocks, empty bottles, and Molotov cocktails at Israeli settlers and soldiers at Joseph’s Tomb, sources said.

Local sources said the protest started late evening on Friday and continued early into the morning in response to an arson attack carried out by suspected Israeli settlers that burned a Palestinian 18-month-old boy alive and critically injured three family members in the Doma village near Nablus.

PA security forces deployed at Joseph’s Tomb prevented dozens of youths from setting the tomb on fire.
The tomb is site to frequent violence as Israeli forces enable Jewish worshipers to make monthly nocturnal pilgrimages through security cooperation with the Palestinian Authority, which guards the site.

Sources said the protesters considered burning Joseph’s Tomb, a holy place for Israelis — particularly nearby settlers — as a form of “real response,” to the burning of the 18-month-old, Ali Dawabsha.

The term ‘Revenge!’ was spray painted in Hebrew near the arson victims’ home in Douma. The use of graffiti to mark an attack is common among extremist Israeli settlers, who often leave the term ‘price-tag’ left on walls after violent incidents.

Palestinians have responded to the deadly attack across occupied East Jerusalem and the West Bank, leaving several injured and one killed by Israeli forces since the attack was carried out on Friday.