Autopsy: Al Khaldi Shot From Behind 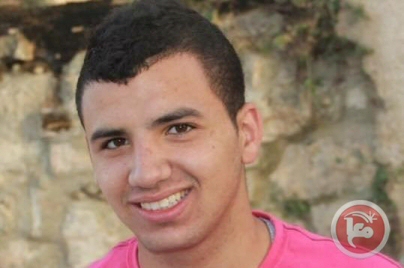 Minister of Justice Counsel Saleem Saqa, Saturday, announced the results of al-Khaldi’s postmortem report, affirming that he was shot from behind.The autopsy indicated that the bullet penetrated through al-Khaldi’s body from behind, where it went through his spine’s first lumbar vertebra and hit the inferior vena cava, a large vein in the abdomen that returns blood from the lower body to the heart, tearing through the intestines and liver, before coming out of the right side of his upper abdomen.

The autopsy ruled, according to WAFA, that the cause of al-Khaldi’s death was due to the intensive internal bleeding that resulted from the tearing of the liver and the inferior vena cava of the abdomen.

The minister denounced the killing of al-Khaldi, describing it as an intentional perfidious murder committed in hatred.

Al-Khaldi Saturday succumbed to critical wounds he sustained after being shot by Israeli forces, late Friday, during clashes at ‘Atara Israeli military checkpoint to the north of Ramallah.

Laith al-Khaldi, 17, a Palestinian from the Jalazone refugee camp near Ramallah, was shot with a live bullet as Israeli forces violently quelled a march in protest of Friday’s settler arson attack which led to the killing of an 18-month-old toddler, Ali Dawabsha, in the Nablus village of Douma.