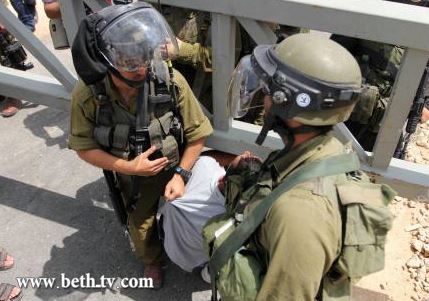 Several family members have been mildly wounded, after being attacked in their own home, when a number of Israeli military vehicles invaded the Um Rokba area in the al-Khader town, south of Bethlehem.Ahmad Salah, coordinator of the Popular Committee against the Wall and Settlements, has reported that the soldiers invaded the home of Wael Ali Salah, after firing concussion grenades at it.

Salah added that the soldiers attacked several family members while searching their property, causing them to suffer cuts and bruises.

In addition, soldiers clashed with dozens of local youths, and fired gas bombs and concussion grenades on them, before chasing many Palestinians in the town’s streets and neighborhoods. No arrest were reported.