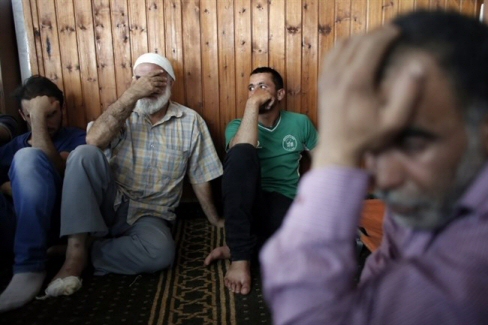 While the Palestinian Authority security services said Saturday it would do everything in its power to crack down on terrorist acts carried out by settlers, the PA has no jurisdiction over Israelis living in the West Bank.

Violent acts carried out by Israeli settlers often occur in the presence of Israeli military who rarely act to protect Palestinian residents and few options for their personal security remain.

While Israeli forces will detain a Palestinian in the occupied West Bank for possessing a knife or gun, Israelis living in the same area are legally able to carry such weapons.

Samir Dawabsha, also the general director of the Palestinian ministry of local governance in Nablus, urged Palestinians across the occupied territory to prepare plans for self-protection.

“The Palestinian people, no matter where they live, are being targeted by the occupation and its settlers, and citizens should beware of treacherous attacks by settlers, and we will try to prevent repetition of what happened with Dawabsha family.”

Samir added that the parents of Ali Saad Dawabsha are still in critical condition but that their four-year-old son Ahmad is beginning to show signs of improvement.

Dawabsha also said the family is planning to take legal procedures against the perpetrators of the “hideous crime.’

PA security spokesperson Adnan Dmeiri warned that Israel would deal with the Dawabsha case just as indifferently as they did with other crimes committed by settlers.

Dmeiri pointed to the high numbers of terror attacks carried out by settlers, noting that 23 mosques and a number of churches were torched by settlers in the last two years.

“Has the Israeli government handed a single sentence to them? Has the government demolished any of their houses?” Dmeiri asked.

“It is a political issue, and if Israel was willing to arrest them [the perpetrators], it could have done that quickly, but the Netanyahu government needs their votes in elections, and this government is dealing with the Palestinians as election bargain chips,’ the spokesman added.

While Israeli leadership declared a crackdown on extremist settler attacks in May 2014 following price-tag attacks on Vatican offices in occupied East-Jerusalem, little action has been taken since.

The perpetrators of violence against Palestinian civilians and their property — both inside of Israel and the occupied territories — are rarely punished, with police closing the majority investigations without an indictment.

Israeli settlers have carried out at least 120 attacks on Palestinians in occupied East Jerusalem and the West Bank since the start of 2015, according to the UN Office for the Coordination of Humanitarian Affairs.