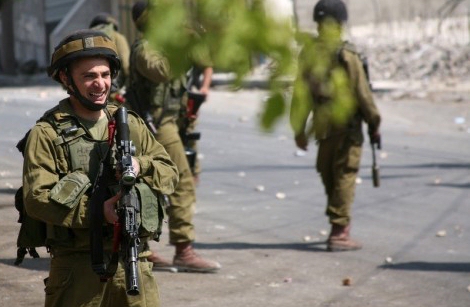 Palestinian security sources from Hebron’s Old City, today, said that Israeli soldiers have brutally attacked a Palestinian youth and, then, forced him to drink gasoline.Sources said, according to the PNN, that soldiers handcuffed Majdi Al-Muhtaseb (21), kidnapped and dragged him to Al-Turba neighborhood, in Tel Rumeida, threw him to the ground and started beating and kicking him for no reason whatsoever.

According to Majdi’s family, the soldiers asked him if he wanted water, and, when he said yes, one of them pretended to be helping him to drink water. When he realized that it was gasoline and not water, the soldier forced him to drink out of it.

Issam Al-Muhtaseb, father of the youth, said that Israeli forces have detained his son and destroyed his own ID card. Then, they beat him on his back and stomach.

After the soldiers let him go, the youth’s father took him to ‘Aalia hospital, in Hebron, where he suffered from severe pains and underwent medical tests.

Majdi was moved back to his house, but reportedly still suffers from back-pain.