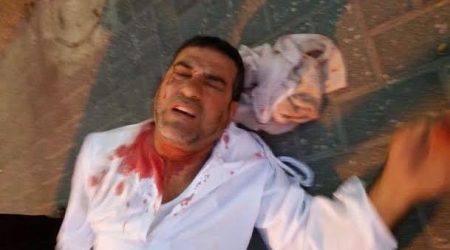 A Palestinian man, Emad Abu Sharekh, was seriously injured when he was brutally attacked on Sunday by three Israelis while returning from Fajr prayers at al-Kabeer Mosque, in Lod City.Abu Sharekh, who lives in the city, explained that three Israeli extremists were waiting for him at the entrance of his residence, where they attacked him with sticks and sharp tools.

According to Al Ray, he went on to say that, when they saw him fall to the ground, they thought he was dead, so, they fled. At this moment, some of his neighbors took him to the hospital. His head and face were bleeding, in addition to several other parts of his body.

He called the Israeli police but they did not come.

The daughter of Abu Sharekh said, while sitting at Asaf Harofe Israeli hospital, that most of the injuries are concentrated in the head.

‘My father did not receive an appropriate medical treatment in the hospital, just because he is Palestinian. Israeli physicians do not care,’ she added.

She noted that the ambulance did not arrive until an hour after the incident.