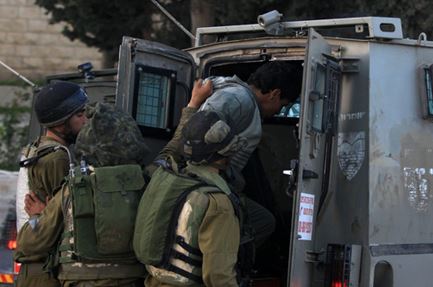 Awad added that the kidnapped have been identified as Hamza Mohammad Ekhlayyel, 18, and Nour Riyad ‘Arar, 19; both were moved to the Etzion military and security base for interrogation.

It is worth mentioning that the soldiers have kidnapped five Palestinians, including three former political prisoners in Beit Ummar, in less than 48 hours.

In addition, soldiers invaded ath-Thaheriyya and Yatta towns, in addition to several neighborhoods in Hebron city, and installed roadblocks on Hebron’s northern roads, in addition to the main roads leading to Sa’ir and Halhoul towns, east of the city.

The army stopped and searched dozens of Palestinian cars, and questioned scores of residents while inspecting their ID cards.

In related news, soldiers shot and injured a young Palestinian man at the Za’tara roadblock, near the northern West Bank city of Nablus.

Initial reports indicate that the man was seriously injured, before the soldiers closed the roadblock.

The army closed the roadblock after the shooting, and prevented Palestinian medics from reaching the wounded man.