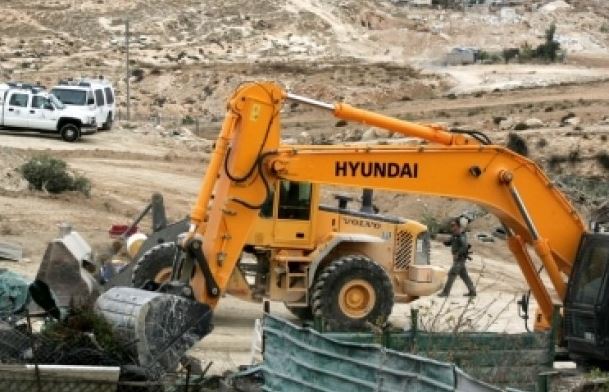 Israeli soldiers invaded Khashm ad-Daraj Bedouin community, east of Yatta town, south of the southern West Bank city of Hebron, and demolished a residential shed, and a barn. Soldiers also demolished a shed in Beit Kahel, northwest of Hebron.Coordinator of the Popular Committee against the Wall and Settlements in southern Hebron, Rateb Jabour, said a large military force, accompanied with a number of bulldozers, invaded the village, after surrounding it.

Jabour added that the soldiers then demolished a residential shed, belonging to resident Mousa Ahmad al-Hathaleen, and his nine family members, and also demolished their barn.

Jabour denounced the attack, and said it is part of an Israeli plan to remove the Palestinians from the area, in order to build and expand its Jewish-only illegal settlements.

There are around 1200 Palestinians living the village, lacking basic infrastructure, and subject to repeated assaults and violations by Israeli soldiers, and fanatic illegal settlers.

In addition, soldiers invaded Beit Kahel village, and demolished an agricultural shed, allegedly for being installed without a construction permit.

The demolished shed is 16 square meters, used for storing agricultural supplies, and as a dwelling, especially in the summer time.