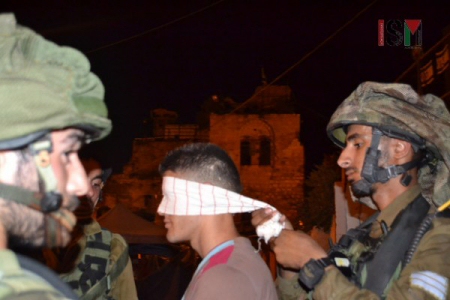 The fire was coming from a building that overhangs into the souk from the illegal settlement of Beit Hadassah. The Israeli military came and immediately began detaining Palestinians, saying that the cause of the fire was from a Molotov.

Local Palestinians say that they believe it was actually an illegal Israeli settler that threw the Molotov into the house, as a way to cause problems for the Palestinians. No one lived in the house where the Molotov was thrown. The Israeli military presence became massive with about 70 soldiers, border police, and police, as well as army jeeps and a large armored vehivle. The military was claiming that there was a homemade bomb in one of the houses. They started to forbid movement and surrounded the area, detaining people for several hours.

They detained eight Palestinians, two of whom were arrested, handcuffed, and blindfolded.

The military, claiming Shalaleh street a closed military zone, announced that if people went any further, they would be arrested. CPTers were also present and documenting the situation. A large military vehicle came out through Bab al Baladia from the illegal settlement. The soldiers began raiding houses, looking for the ‘homemade bomb.’

Eventually, a smaller remote controlled robotic device came out from the back of the large military vehicle. The soldiers said that it would be used to detonate the bomb they claimed was hidden somewhere in the souk.
Meanwhile, groups of military and border police were scattered throughout the souk, not allowing people to cross while raiding houses.

A group of 30 soldiers started to force open the gate of a shop with a crowbar in search of a surveillance cameras that may have filmed whatever caused the fire.

The army forced themselves in and broke down the door without even botheriing to ask for the key from the owner of the shop. At this time they also detained a young man near the shop, making him put his head against the wall.

When ISMers were questioning the soldiers about what they were doing, the ‘commander’ told them to back off and then said if he saw them again, he would have them arrested. He also called the soldiers at checkpoint 56 (also known as H1/H2 or Shuhada street checkpoint) and told them to tell the ISMers the same thing.
All accounts of the situation vary, but this is the information ISM knows from what was witnessed and from Palestinian sources.