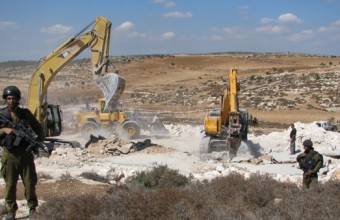 Israeli authorities, Tuesday, knocked down three Palestinian-owned homes in Dahmash, an unrecognized Palestinian village located on the outskirts of Tel Aviv, according to media sources.The demolished structures belong to the Assaf family, and were recently reconstructed after being demolished by the authorities on March 15 under the pretext they were illegally constructed.

WAFA further reports that the demolition of these structures, on March 15, took place despite of a High Court decision that called for a mutual agreement between local owners and the Israel authorities.

Though the village’s Palestinian family has a solid proof of ownership in the Israel Land Registry, the state has so far not recognized their claim to the land, and has deprived the village of the necessary infrastructure and even the most basic services, such as sewage, roads, electricity, garbage collection or a post office.

Unrecognized and underprovided, the village is the last Palestinian Arab community to remain in Central Israel district which houses the Tel Aviv metropolitan area.

Over the past few years, Palestinians of Dahmash have been struggling against repeated home demolitions by coming up with their own master plan in order to gain recognition for their rights to live on their land.