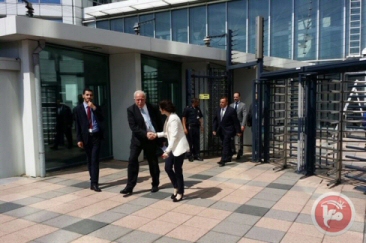 The Palestinian Authority filed a report on settler violence with the International Criminal Court on Monday, following an arson attack in the West Bank last week that killed an 18-month-old Palestinian toddler.Foreign Minister Riyad al-Maliki told Ma’an News Agency that the file was handed over to the ICC’s chief prosecutor Fatou Bensouda during a meeting at the international court’s headquarters in the Hague.

According to WAFA correspondence, the meeting discussed a preliminary probe the ICC is conducting on possible war crimes in the occupied Palestinian territories.

The probe, which was opened on January, is not a full investigation but an examination of available information to decide whether there is a ‘reasonable basis’ to proceed with an investigation.

Maliki told Ma’an that he discussed many important issues relating to the Palestinian cause and recent Israeli violations against Palestinians, adding that it was one of the ‘best’ meetings he had held with Bensouda.
WAFA said the foreign minister stressed that ‘the continuation of the Israeli occupation and its policies, including its settlement expansion policy, along with the impunity it grants to settlers,’ is encouraging violent attacks such as last week’s arson attack.

The 18-month-old toddler, Ali Saad Dawabsha, was killed in a firebombing carried out by Israeli settlers in the West Bank village of Douma, to the south of Nablus, on Friday.

Israeli settlers reportedly smashed the windows of two homes in the village before throwing flammable liquids and Molotov cocktails inside, killing the toddler who was trapped inside one of the homes and critically injuring his parents and four-year-old brother.

The crime has sparked international outrage, although many Palestinians have pointed out that settler attacks against the Palestinian community are common and often go unpunished by the Israeli authorities.

Israeli settlers have carried out at least 120 attacks on Palestinians in occupied East Jerusalem and the West Bank since the start of this year, according to the UN Office for the Coordination of Humanitarian Affairs.

The ICC, set up in 2002, is the world’s only permanent independent body to try the most serious crimes of concern to the international community.