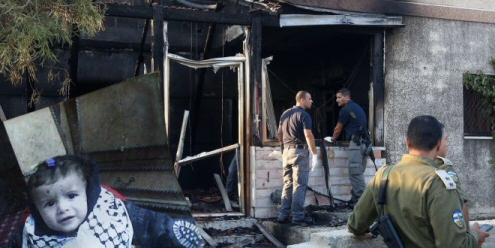 Israeli police, on Wednesday morning, stated that they were not able to identify the settler who torched the home of 18-month-old Ali Saad Dawabsha, who was burned to death in the attack. Israeli police spokeswoman, Luba Samri, in a statement on Tuesday, said that the police was still working on the case, but needs more leads.

In a post on its official Facebook page, the police wrote that it “asks for the help of the public in the investigation of the arson and murder in Douma Village.”

“Anyone who has in their possession information or any detail that could help in deciphering the murder is asked to contact the phone number: 050-8386626,” wrote the police.

According to the PNN, the current lead to the case is the Hebrew graffiti which says “the Messiah King will live,” a phrase more commonly associated with Chabad than with “hilltop youth” Jewish residents of Judea and Samaria. Likewise the word “revenge” that was also found was written in a script some say appears to indicate an Arab writer.

According to i24 news, the attack is believed to have been carried out by at least two right-wing Jewish extremists.

Israeli Channel 10 said that security sources have pointed the finger towards an illegal outpost in the eastern Shilo area in the West bank which, according to the sources, have “a history” of hostility with the Palestinian villages in the area.

While the police recently arrested far-right activist Meir Ettinger, he has not been named as a suspect in the attack, said 124.

Ettinger, whose grandfather Meir Kahane founded the racist anti-Arab movement Kach, was arrested on Monday “because of his activities in a Jewish extremist organization,” a spokesman for the Shin Bet internal security service told AFP.

The court prolonged the incarceration of Meir Ettinger until at least Sunday, judicial sources said.

Police said Ettinger, who is aged around 20, was suspected of “nationalist crimes” but did not accuse him of direct involvement in last week’s firebombing of a Palestinian home in the occupied West Bank, in which a toddler was burned to death.

Haaretz reported Ettinger was linked to last month’s arson attack on the Church of the Multiplication of the Loaves and Fishes on the shores of the Sea of Galilee. The church was damaged and two people injured.