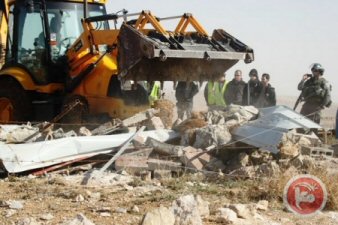 Israeli authorities, Wednesday, demolished seven Palestinian-owned agricultural structures in the village of al-Aqaba, northern Jordan Valley, in addition to serving Hebron area Palestinians demolition notices regarding 20 homes, according to local sources.Head of the village council of al-Aqaba, Sami Sadeq, said an Israeli army force broke into the village in the morning and demolished seven agricultural structures used as grain storage sheds and as animal shelters. Forces further uprooted an electricity pole in the village, according to WAFA correspondence.

In the meantime, forces stormed the nearby area of Khirbet Barza, where they demolished an animal barn and wreaked havoc in the area, causing destruction to public and private properties.

Meanwhile, in al-Arroub refugee camp, to the north of Hebron, Israeli bulldozers demolished a house under construction, citing unpermitted construction as a pretext.

The army also notified Palestinians in the camp of their intentions to demolish 20 homes, under the same pretext.

Both villages are located in Area C, under complete Israeli military control, where Israel rarely grants construction permits for Palestinian locals, forcing many of them to embark on construction without obtaining permits.

According to the Israeli human rights group B’Tselem, Israeli authorities prohibit Palestinian construction in vast areas of Area C, citing various rationales such as “defining these areas as state land, survey land, firing zones, nature reserves and natural parks, or by incorporating lands into the jurisdiction of settlements and regional councils.”

Most Palestinians are forced to build without a permit to meet their needs. In many cases, displacement is due to cumulative pressure created by a combination of factors, including settler violence, movement restrictions (including the Barrier) and restricted access to services and resources, said the OCHA.

According to the organization: “Despite a decline in the number of structures demolished in 2014 compared to 2013 (601 vs. 663), the number of people displaced increased by almost 10 per cent.”

Four houses were demolished on punitive grounds in 2014 for the first time since 2005, added OCHA.

Meanwhile, B’Tselem estimated that, from 2006 until 30 June 2015, Israel demolished at least 876 Palestinian residential units in the West Bank (not including East Jerusalem), causing 4,105 people – including at least 2,011 minors – to lose their homes.

To be noted, Israel is planning to annex the Jordan Valley into a completely Israeli area, primarily in agriculture, targeting to ban territorial contiguity between a future Palestinian state and the rest of the Arab world.