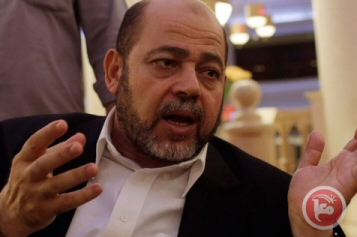 A senior Hamas official said, Tuesday, that his movement will not deal with the new ministers sworn into the Palestinian government in a reshuffle, last week.Hamas political bureau member Moussa Abu Marzouq said, on the movement’s official website, that there is a national agreement on removing the incumbent Prime Minister Rami Hamdallah.

According to Ma’an News Agency, Marzouq said Hamdallah was ‘a failure,’ who had not resolved anything during his time in office.The Hamas leader added that, although there are currently no plans for a long-term truce with Israel, the proposed notion of forming one to solve Gaza’s issues would be considered ‘acceptable.’

Fatah has expressed worry over the move, saying that such a truce would separate the Gaza Strip from the occupied West Bank and East Jerusalem, and end the possibility of a Palestinian state along the 1967 borders.

Five new ministers were sworn into Hamdallah’s ‘unity government’ on Friday, at the presidential headquarters in Ramallah.

There had been talk of a government reshuffle for months, but, in mid-June, it was announced at a Fateh council meeting that the entire government would soon be dissolved.

The PLO’s executive committee appointed another committee to consult Palestinian factions — including Hamas — on forming a new government, and it was widely expected that the new government would see factional leaders replace the current government’s independent technocrats.

At the beginning of July, however, it was announced that President Abbas had assigned Hamdallah to make ‘slight changes’ to the existing government, while talks on forming a new one were ‘ongoing’.

The unity government was formed in June 2014 in a bid to end division between the Fatah-led PLO and Hamas, but has repeatedly failed to overcome divisive issues.

The Hamas movement said last week that it viewed a government reshuffle as ‘unconstitutional and outside consensus.’