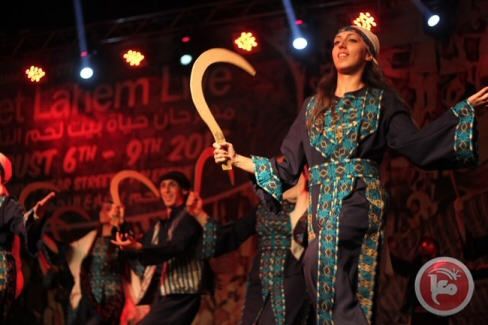 At the end of Star Street in the Old City of Bethlehem, turquoise metal doors that are usually locked have been set wide open. In a cave-like interior, a group of women sits in the dim light on brightly colored pillows and sofas, discussing what it means to live as a woman in Palestinian society.“Last year, our morning workshops were almost empty. But now we had about twenty women, who all left the panel inspired,” says Daniele Abilas, a project coordinator at Holy Land Trust, a Palestinian peace-building organization that has for the third year in a row organized Bethlehem’s hugely successful community festival, Bet Lahem Live.

The three-day festival combines music and theater with workshops on spirituality and social responsibility, with performers and speakers coming from all over the world. This year’s themes culminate in faith, justice, and culture. All the events are held along Star Street, a traditional pilgrimage route for Christians.

One of the main goals of the festival was to engage the local community. “Before the festival, we formed a Star Street Committee for people living on the street. It was the locals’ initiative to have bingo and backgammon at the event, for example,” Abilas says.

The organizers hope to get about 30,00 visitors this year, double the turnout for last summer’s festival. Abilas says they expect the majority, about 70 percent, to be locals — not just from Bethlehem but also from other cities in the West Bank as well as Palestinians living in Israel.

At the morning workshop, nearly all the participants are foreigners. Abilas says that panel discussions often attract foreigners, while Palestinians come mostly for family activities and evening celebrations, for which they throng Star Street in thousands.

Across the street from the women’s panel, another group of visitors has gathered around a burning candle. Ari Pliskin, an American Buddhist practitioner and minister at the Zen Peacemaker Order, kneels in front of the candle and bows to mark the start of a meditation.

Just two months ago, Pliskin had no idea that he would be guiding a Buddhist ceremony in the Old City of Bethlehem. Earlier this week, he flew to Tel Aviv to attend his niece’s bar mitzvah, a Jewish coming-of-age celebration.

But when Pliskin heard about the festival in Bethlehem from Sami Awad, the founder of Holy Land Trust, he knew he wanted to contribute as well — and to visit the occupied Palestinian territories for the first time.
“It’s amazing to be here. The people that I meet are lovely,” Pliskin says.

Despite the festival’s focus on the local community, the organizers have tried their best to attract international visitors like Pliskin. This is why many of the workshops and campaign materials are offered in English too.
“There’s a misrepresentation of Palestine abroad – stereotypes of violence and terrorism,” Abilas says. “We invite the international community to come here and taste the real Palestine.”

The festival also aims to bring economic activity to Star Street, which was left almost deserted after Israeli incursions during the Second Intifada in the early 2000s.

As the second day of the festival progresses, the street slowly fills with merchants from across the West Bank, selling artisanal products ranging from soap from Nablus to ceramics from Hebron. Cafes and restaurants have been set up across the length of the street.

In one corner, Singer cafe has created a little terrace with a dozen of tables and chairs. Normally based in Beit Sahour, a town east of Bethlehem, the cafe is serving cold drinks for festival-visitors for the duration of the festival’s three days.

The cafe owner, Tariq Elayyan, says he is happy to see the street more alive, although he says that a lack of certain facilities has posed certain difficulties.

“We had to connect to the electricity in the house on top the cafe,” Elayyan says, pointing to the long cords curling from the upper neighbor’s balcony.

Beyond the festival’s three days, tourists rarely come to visit the long, stone-paved street. Things were different about twenty years ago, says Fares Eslini, who’s working at Singer cafe. That was before the construction of a new bus station, when tourist buses stopped at the other end of Star Street, and had to cross its length to reach the Nativity Church on Manger Square.

Even without the flow of tourists, Elayyan says he has been trying for years to open a cafe on the ancient street. But as there are no places to rent, he is forced to pack away his coffeemakers once the festival is over.
As the day turns into evening, thousands of Palestinians begin flocking to the festival, as Abilas from Holy Land Trust had hoped.

A large crowd forms before a main stage erected at the end of Star Street, where both Palestinian and foreign musicians perform their songs, and thousands throng the length of the vibrant street.
“With this festival, we want to offer people a moment of fun,” Abilas says. “Life is hard enough under occupation.”