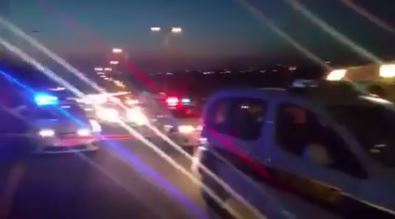 Palestinian medical sources have reported, on Monday evening, that a young man was shot dead by Israeli army fire, at a gas station on Road #443, near the Modi’in illegal colony, west of the Central West Bank city of Ramallah. The Israeli army claimed the soldiers shot the Palestinian, after “he stabbed a settler.”

The slain Palestinian has been identified as Anas Taha, 20 years of age, from Qotna town, northwest of Jerusalem.

The army said an Israeli man, 26 years of age, was injured in the attack, and was moved to the Shaare Zedek Medical Center, in Jerusalem.

The West Bank has been witnessing ongoing tension and protests, especially after Israeli terrorists firebombed a Palestinian home in the Douma village, near the northern West Bank city of Nablus, burning to death Ali Dawabsha, 18 months of age, while his father, Sa’ad Dawabsha,, died of his wounds, Saturday.

His wife, and his son, Ahmad, 5 years of age, remain in a critical condition.